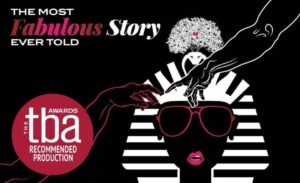 If you’re the kind of person who doesn’t get swept up in the traditional celebrations at this time of year because you’re (a) single, (b) sober, (c) nonreligious, (d) hate being forced to listen to Christmas music, (e) dread family gatherings, or (f) can no longer fake enthusiasm for the holidays, fear not. San Francisco’s Left Coast Theatre Company is currently presenting The Most Fabulous Story Ever Told down at the EXIT Theatre. Known for his comedic skills as a screenwriter, novelist, and playwright, Paul Rudnick (who wrote the screenplays for Jeffrey, In & Out, and Addams Family Values) is one of the great gay iconoclasts.

Rudnick’s 1998 play – inspired by the religious right’s talking point that “God made Adam and Eve, not Adam and Steve” – dips the Holy Bible in glitter and gives it a super gay makeover with the kind of biting wit and ebullient joy that could completely ruin Christmas for America’s three unwise men. Imagine Mike Huckabee’s blood freezing, Mike Pence gagging on forbidden fantasy of deep throating Donald Trump, and Mike Pompeo exploding like a rancid, pompous pinata. Fasten your seatbelt and shout “Happy Holidays!”

Despised by Christian fundamentalists, Rudnick’s script gives the Bible a much-needed sprucing up in which the nude and naive Adam (Max Seijas) and Steve (Michael Conner) meet the first lesbians to inhabit the Garden of Eden — Jane (Jessica Lim) and Mabel (Antonia Blumberg) — with narration provided by a stage manager (Cheryl Games) we can all assume to be God. Throw in a horny rhinoceros with a huge front bumper (not to be confused with Thornton Wilder’s “E proboscis unum”) who has an affair with Steve, a preening Pharaoh (Stefin Collins) who could make RuPaul shiver with delight, and you’ll get an inkling of what might have gone wrong on Noah’s Ark.

Act II is set in Manhattan on Christmas Eve. Steve (who is not in a celebratory mood) is hiding the fact that he’s been diagnosed with HIV and may not have long to live. Jane is justifiably angry at being a bull dyke who is nine months pregnant and starting to experience labor pains. The guests include a go-go boy (Byron Guo) who is terrified of having to help deliver Jane’s baby, and a paraplegic lesbian rabbi (Kim Saunders) who has a program on public access cable television. Grab some popcorn (or poppers, if you prefer) and it will soon be much easier to understand why some LGBT folks literally want to scream “Don we now our GAY apparel!” as Black Friday approaches.


If Congressional clowns like Devin Nunes and Jim Jordan haven’t delivered sufficient comic relief for the season, performances of The Most Fabulous Story Ever Told continue through December 14 at the EXIT Theatre (click here for tickets).