San Francisco's Left Coast Theatre Company recently presented the world premiere of Come Here Often, an intriguing drama co-written by Erica Andracchio,Terry Maloney Haley, Neil Higgins, Rita Long, and Chris Maltby. While there are many colorful characters on deck throughout the play, the protagonist is not human. Instead, it is a gay bar in the Castro named The Parlour which has withstood the ravages of time and, if all goes well, will celebrate its 50th anniversary in the not too distant future.

Over several decades, The Parlour has served as a drinking hole, living room, pick-up joint, and destination for gay men and lesbians who arrive in San Franciscohoping to start their lives anew. Unlike Cheers, The Parlour may not be the the kind of place where everyone knows your name. The first full-length play written by the creative team at LCTC, Come Here Often uses a curious gimmick to anchor the bar's importance to the local LGBT community by setting the action in three different decades. 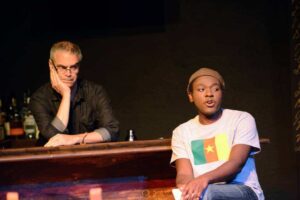 In the summer of 1978, San Francisco is still celebrating the historic election of Harvey Milk as the first openly-gay member of the city and county's Board of Supervisors. Castro Street is flooded with new arrivals in town who are eager to live in a city where gays are not reviled and there is hope for a brighter future. However, by year's end, Milk will have been assassinated by Supervisor Dan White, forever changing the course of LGBT history.

In 1978, The Parlour's bartender is Noah (Terry Maloney Haley), whose clients include:

Fast forward to 1998, nearly a year after Ellen DeGeneres made headlines by coming out of the closet on her television show. Unfortunately, on October 6, 1998, Matthew Shepard was beaten and left to die on a fence outside of Laramie, Wyoming. For those who have survived the early years of the HIV/AIDS crisis and, thanks to new drug regimens, are living with a "manageable disease," Shepard's brutal murder is a devastating reminder of what can happen to LGBT people who live in small towns. 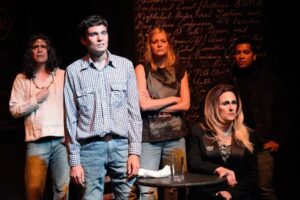 Although Dido has passed on, her ghost still haunts The Parlour. The new bartender is a confident trans man named Zeke (Nic Sommerfeld) whose patrons include: 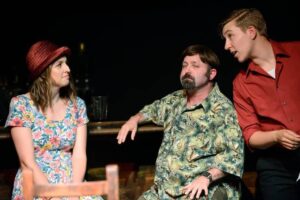 By 2018, same-sex marriage has been legalized by the United States Supreme Court but, following the election of Donald Trump, the social and political advances made by LGBT people are experiencing increased pushback along with homophobic acts of violence that have the potential to force many people back into closeted lifestyles. In an era of heightened sensitivity to political correctness, The Parlour's owner/bartender, Jonny (David Boyll), goes out of his way not to discriminate against anyone who enters the premises.

Come Here Often begins in 2018, as a young black gay man named Cartier (Paul Renolis) tells Jonny about his plan to attract new business with a social mediaPR campaign. The ageing bartender feigns interest, knowing all too well that the business is teetering on the verge of bankruptcy. If Jonny can sell the building, he could fund a comfortable retirement for himself in Guerneville. 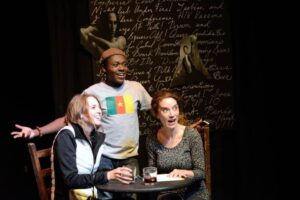 When two drunk, straight women enter The Parlour to check the place out for a future bachelorette party, Claire (Mary Cait Hogan) and Debbie (Emily Keyishian) are titillated by the bitchy repartee they witness between Alec (Ryan Engstrom) and Antoine (Edgardo Vega), two drag queens on their way to perform at another bar. Unfortunately, the women's behavior angers Jonny, who asks them to leave and hold their party somewhere else (suggesting that they might feel a lot more comfortable renting a suite at a local Marriott). A video of his rant that gets posted online quickly leads to trouble (an older Johnathan reappears in 2018 with a surprising plot twist that saves The Parlour from going under).

Directed by Chris Maltby (with costumes by Hal Dubiel), the large ensemble does an impressive job of 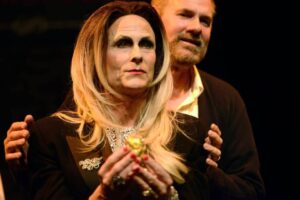 jumping in and out of characters from three different decades, thereby making Come Here Often resemble a diorama depicting life inside a gay bar.. I was especially taken with the performances by Ryan Engstrom, Wera von Wulfen, Nic Sommerfeld, Carole Swann, and Christian Heppinstall.

Following Johnathan's gaybashing, the first act rises to an emotional climax as the patrons of The Parlour face the audience and voice their inner hopes and fears. Although deeply poignant, this choral effect (in which an increasing number of characters talk over each other's voices) needs some judicious trimming in order to prevent it from becoming counterproductive.