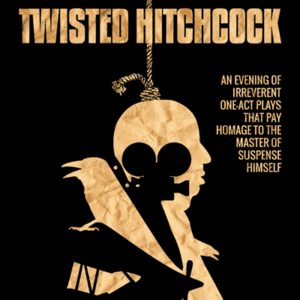 San Francisco’s Left Coast Theatre Company recently premiered three short plays under the umbrella title of Twisted Hitchcock. To make sure that the audience was in on the joke, the usual pre-show announcement about cell phones and emergency exits finished with the following request spoken by an actor imitating Alfred Hitchcock). “And now please sit back and prepare…to die!”

First up in this three-course meal of suspense and supreme silliness is a spoof of Hitchcock’s Psycho (1960) entitled Master Bates. Written by LCTC’s artistic director, Richard S. Sargent, and directed by Alexia Staniotes, the action commences with the shadow of an attractive woman (Ellen Dunphy) taking a shower. As she lathers herself up, another figure approaches brandishing a kitchen knife. Each time her assailant (AJ Davenport) gets close to the target, the showering woman changes position or does something else to inhibit any rear window action. After a few tries, the attacker can no longer control herself and becomes obsessed with her target’s sexy ass. Lights out on the shower scene.

Meanwhile, Norman (Tim Garcia) is a horribly conflicted young pervert who has punched two peepholes in a wall through which he can spy on the guest staying in the next room. The current occupant is a middle-aged gay investigator trying to solve the curious disappearance of one of the Bates Motel’s previous guests. After noticing two eyes following him around his room, Milton (Dene Larson) knocks on Norman’s door and and starts to question the nervous young man, who desperately craves a father figure.

The second offering pays tribute to 1955’s The Trouble With Harry. Renamed The Trouble With Mary, James A Martin’s play been directed by Debi Durst with care to frame transgenderism in a new light. Mary (Matt Weimer) is a middle-aged man who had a sex change operation, leaving behind his young son, Arnie (Tim Garcia), and his widow, Jennifer (an angry, obnoxious woman who has been on the lam after helping to rob a bank). Sam (Ryan Engstrom) is a local blogger trying to shoot a selfie that can go viral. What better way to accomplish his goal than posing with a dead drag queen?

Whenever Mary’s spirit has a chance to speak, she tries to communicate with Arnie, who is more than happy to accept his former father as a lady. Jennifer (Ellen Dunphy) may be furious when Arnie disobeys her commands, but when local policeman Calvin Wiggs (Marc Berman) attempts to get in on the action, Sam proves adept at threatening to blackmail the ex-wife and the cop. The play ends with Arnie lovingly applying makeup to Mary’s face (as well as his own) while father and son renew their emotional bonds.

Birdsploitation is written by Terry Maloney Haley (a frequent contributor to LCTC). Directed by Richard Ryan, it includes a cast of avian actors called to the set for a new movie. As the director’s assistant, Aryn Sparrow (Ryan Engstrom), attempts to get various scenes set up for filming, the actors all stand around discussing the problems confronting them.

By the end of the play, they’ve come up with the perfect solution. When Aryn announces that the director is ready to film a scene, the birds all sit still instead of flying into action. After all, how long will it take for the producer and director to find and train new birds for their film?
All three plays deliver some wonderfully comic moments, with the best acting coming from Tim Garcia and Ryan Engstrom. Performances of Twisted Hitchcock continue through August 26 at the Shelton Theatre (click here for tickets).